The Irish College was founded in Santiago de Compostela by Ó Súilleabháin Béarra and Philip III of Spain in 1605 to provide for the higher education of Irish people. Under Jesuit direction from 1613 to 1767, and merged thereafter with the Irish College at Salamanca. In private ownership for over one hundred years. The building has a triple facade, with ground-floor businesses on either side of the central block.

There is a statue of Saint Patrick, in whose honour the college was named, in the cloister. The snake beneath his feet is of iron, and, with the passage of hundreds of years, it is well rusted.

The Irish link is reflected in the window decoration. The stairway is of stone on the lower floors, continuing to the top floor in wood.

An entrance to a meeting room has coats of arms relating to Santiago de Compostela in its stained glass.

Following the closure of the Irish College in Salamanca in 1951, the archives of the Irish colleges in Spain were deposited in Maynooth College. While material transferred from the Santiago de Compostela college was included, it would seem appropriate that the large numbers of documents still in this college, in bundles, drawers, and desks, throughout the building, should be examined with a view to assessing their historical significance. The passage to the left inside the entrance under the statue in the cloister, which may originally have led to an oratory, also needs to be examined carefully. 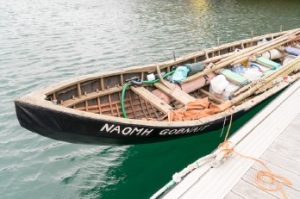 The place of the Irish College at Santiago de Compostela in the broader context of relations between Ireland and continental Europe was brought into sharper focus in June 2016 with the arrival of pilgrims from Ireland at A Coruña in Galicia, beside the Tower of Hercules and the statue of Breogán, by naomhóg, on the Camino by sea, and the final glorious arrival of the naomhóg and its crew at the doors of the Cathedral of Saint James. Networks of interaction and exchange between Ireland and this part of the world have existed from at least the early bronze age, over four thousand years ago. The Irish College at Santiago is part of these lasting bonds of friendship and mutual support.